What is a Container?

It is a new virtualization technology, an Operating System virtualization. It makes believe to an application that it is running in a dedicated environment with its own libraries, all the features of the host Operating System even if it is not the case.  It is an isolated, independent and portable operating environment.
This container will be easily moved from a machine to another one, from a cloud to another cloud or from a test server to a pre-production server…
It is a really development and test oriented feature.

Containers have been originally created to facilitate international shipping all over the world as they have a standardized size to be able to go over all boats, trains, trucks… This standardization brings a better industrialization and therefore lower transport costs.
Containers in IT have been used the same approach to virtualize some processes and since more than one decade some products exist as following:
Parallels Virtuozzo (2001)
Solaris Containers (2005)
Linux LXC (2008)
Docker (2013)

Docker uses a lot of  known tools but make it use simpler: best packaging and new functionalities which make the use of it more efficient and simpler.
Docker virtualizes the FileSystem, the NameSpaces, the CGroups ( limitation and prioritization of resources CPU, RAM, Network…)… all the different component of the Operating System. The container uses the host OS, thus it will not be possible to instantiate a Linux container in a Windows running a Docker Engine and vice versa. 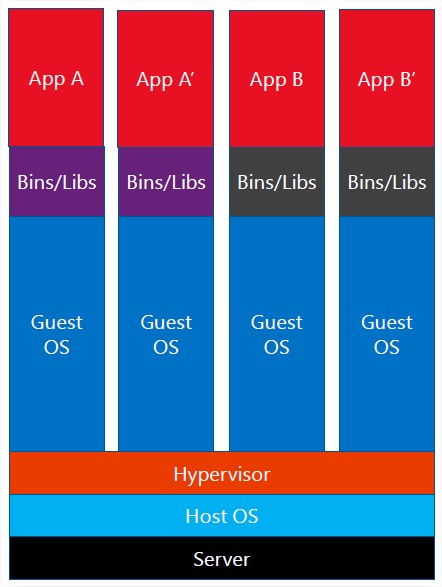 Unlike traditional virtual machines, containers run on the top of a physical machine that includes a host Operating System, either a Docker Engine or a Container Engine and a set of libraries and Binaries usable by applications.
You can run more Containers than Virtual Machines on the same host server as Container are more lightweight.
Containers don’t need their own CPU, RAM, set of binaries and libraries, disks space… There is a big difference compared to Virtual Machines which share host resources and need their own Os, disks, libraries, … 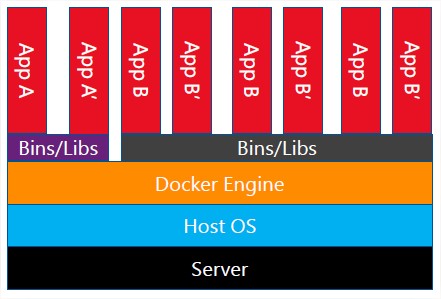 Docker is an Open-source solution to manipulate LXC Container. It is a Client Server oriented model: with a Docker  client and Docker Engine. Docker has more or less forty command used via command line to list all images, start a container, publish an image in a repository (private or public)…

The Docker Client (command line) is available for Mac, Linux and Windows.
Some commands are:
docker run: to instantiate a new container
docker pull: to retrieve an image
docker build: to build a new image

The Docker Engine (Docker host) is only available for Linux distribution (Ubuntu, RedHat…). But this Linux machine can be a virtual machine on Azure, Hyper-V, VMware…

A Docker image represents more or less the filesystem of the Operating System, but is in an inert state. Each image is constituted of a certain number of layers.
Images are created from a configuration file named Dockerfile which describes exactly what need to be installed on the system.

Docker hub is a public repository of container images.
It offers:

More or less one year and a half ago, Microsoft announced his partnership with Docker. Now, Docker is in the Azure MarketPlace:

and application in Container also: 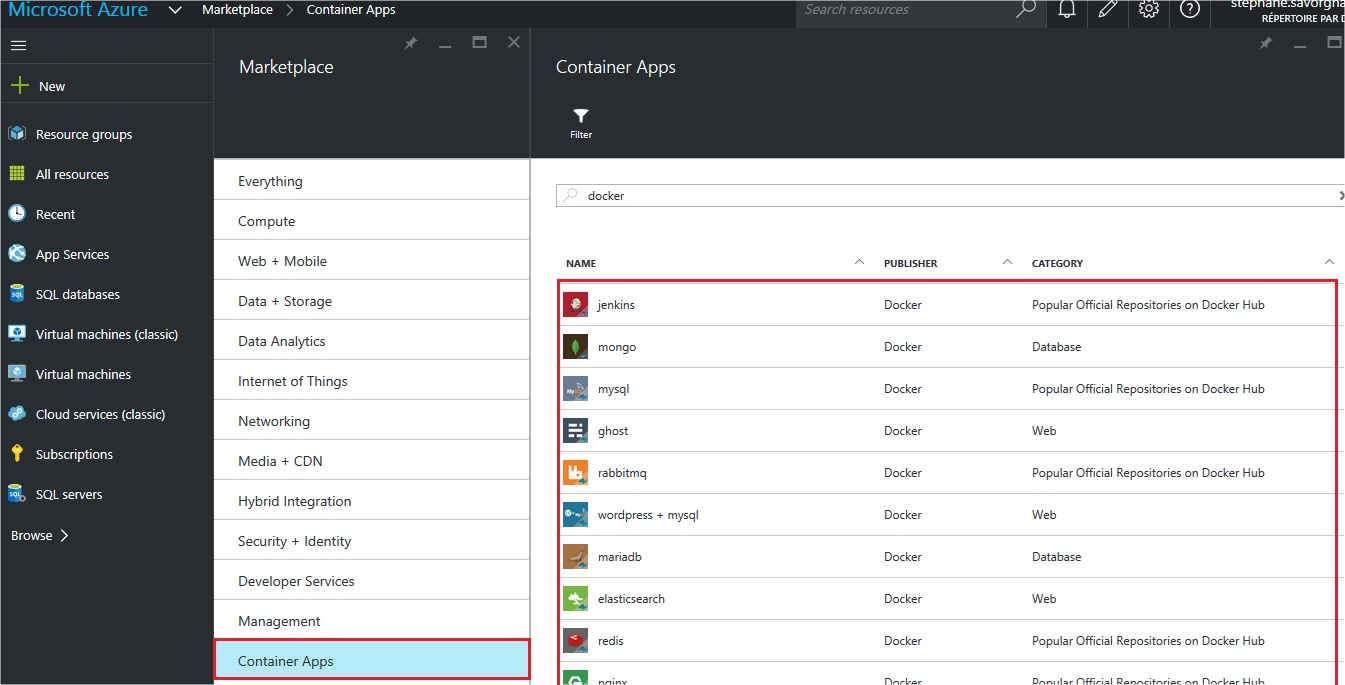 The partnership has brought:

As Container is a new feature of Windows Server 2016, you will have to install it as a normal feature.
For that go to Server Manager, Manage and click on “Add Roles and Features”. In the wizard, in the Feature screen just select the Container feature: 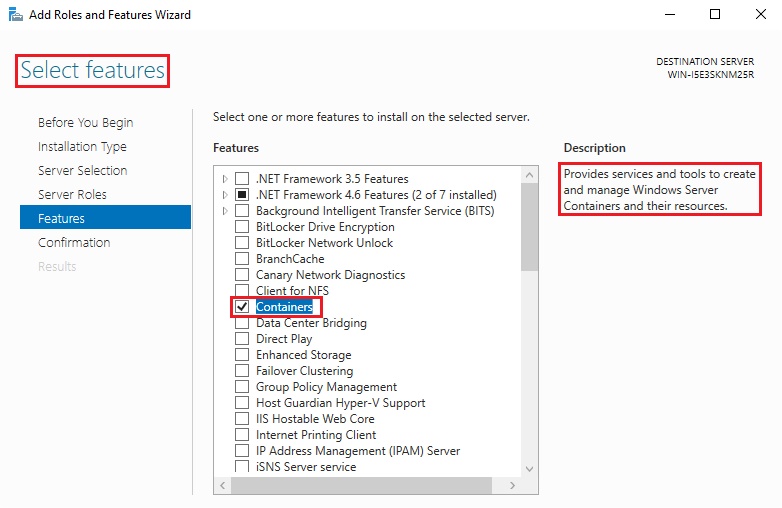 Once it is intalled, you can open a Powershell windows and have a look at the possible PowerShell Cmdlets for Containers: 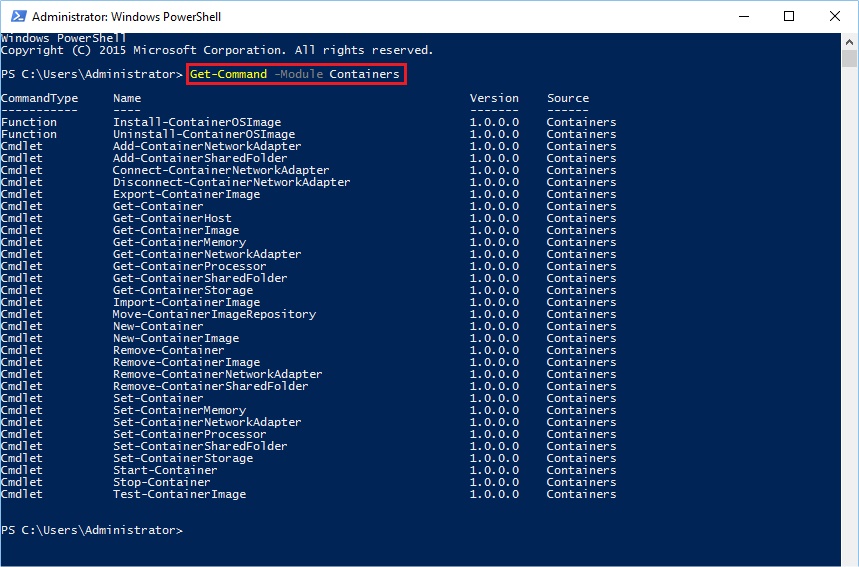 I will play with those new Cmdlets in a future blog, but here let’s continue to explain how Microsoft has integrated those containers in Windows Server 2016.

The Docker Client, docker.exe, is shown as a command line, the goal is to have a unique client which is able to manage Linux and Windows Container.
The command line docker.exe will be able to instantiate images of Linux or Windows Container. But a container can only run on a host machine which executes the Docker Engine that runs on the same OS.
A Linux container will use the Kernel of the host machine which executes the Docker Host on Linux.
We did OS virtualization and not machine virtualization. 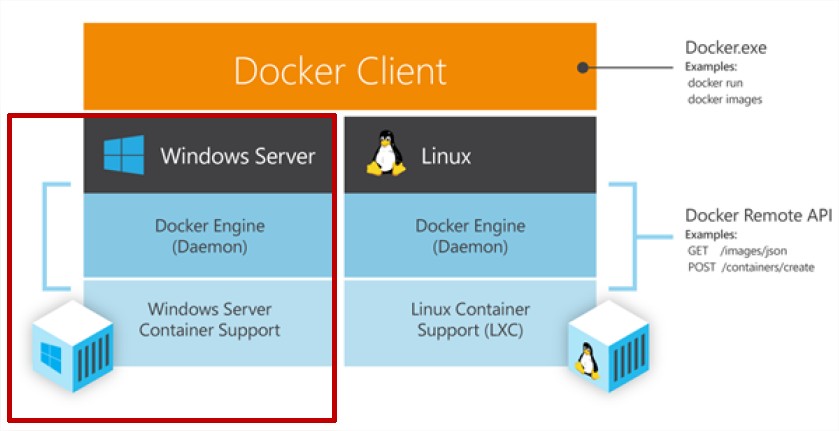 To be able to manage Containers, PowerShell script is used. Here some PowerShell commands:

The development process for a Container is as follow:

Containers will help developers to build and easily deploy much faster high quality applications. Containers will also help administrators to create quickly and easily new architecture for test, development  or production environment and will simplify the maintenance and update.
Let’s see how Container will modified this ecosystem.