During the last MVP summit, we had some interesting discussions about availability groups with the SQL Server team and I remember someone asked for managing scenarios like Oracle cascaded destinations and the good news is that SQL Server 2016 already addresses this kind of scenario with distributed availability groups. For example, let’s say you have to manage heavily reporting activity on your application and a solution would be to offload this activity across several secondary read-only replicas. So, a typical architecture as follows: 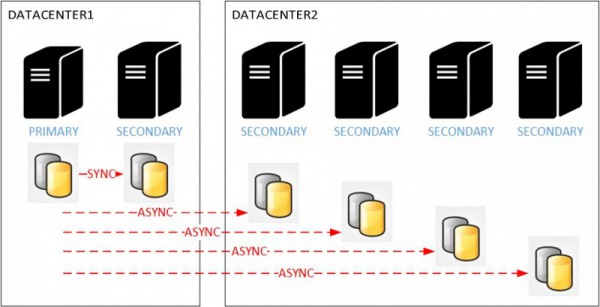 In addition, for a sake of precision, let’s describe the test protocol:

Here the output of the whole test. 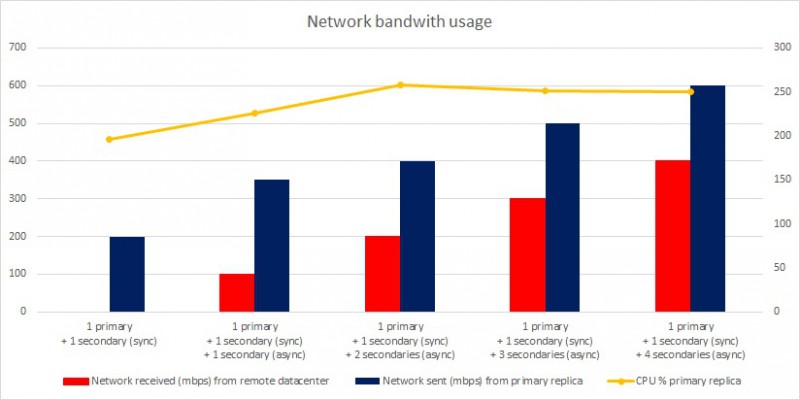 We may also notice the third iteration of the test (1 primary + 1 secondary sync + 2 secondaries async) is showing up a critical point if we have to face a scenario that includes a WAN connection between the two datacenters with a maximum network bandwidth of 200 Mbps. Indeed in this case, the network bandwidth could be quickly saturated by the replication traffic between all the replicas and here probably the first symptoms you may encountered in this case:

You may minimize the network overhead by isolating the replication traffic to its own network but in some cases if you’re unlucky it will not be enough. This is a situation which may be solved by introducing distributed availability groups and the cascaded destinations principle as shown below: 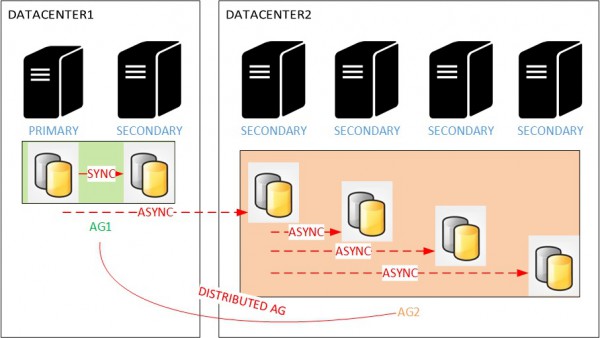 Distributed availability group feature will permit to offload the replication traffic from the primary to the read-only secondaries by using a replica on the second datacenter. Thus, we are able to reduce drastically the network bandwidth from 4 replicas to only one. In addition, adding one or several other replicas may be considered because this new architecture is more scalable and we will only impact local network bandwidth on the second datacenter.

Let’s run the same workload test on the new architecture and let’s have a look at the new output:

From a wait statistics perspective, we got rid of HADR_DATABASE_FLOW_CONTROL meaning we did not saturated the network link between the 2 datacenters

The picture below confirms the replication traffic dropped drastically with this new configuration (150 Mbps vs 400 Mbps from the first architecture).

In this blog post I tried to demonstrate using distributed availability groups to cascade the replication traffic to another replica may be a good idea in order to address scenarios which include many secondary replicas on a remote location with a Bylow network bandwidth. However introducing distributed availability groups has a cost in terms of management because we have to deal with an additional layer of complexity. But if the rewards make the effort worthwhile we should consider this kind of architecture.