This is my Distributed Replay configuration: 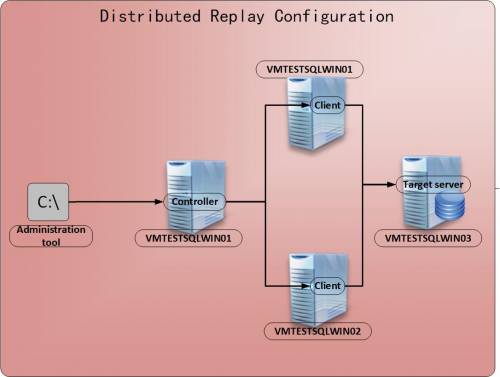 Creation of the trace

I will use the two Distributed Replay clients to generate a workload against the target server with two PowerShell Windows which will execute diverse SQL scripts. To capture the trace, I will use the SQL Server profiler tool which is known in SQL Server to create, watch, store, and replay a trace.

Connect to the target and a screen for trace properties opens: 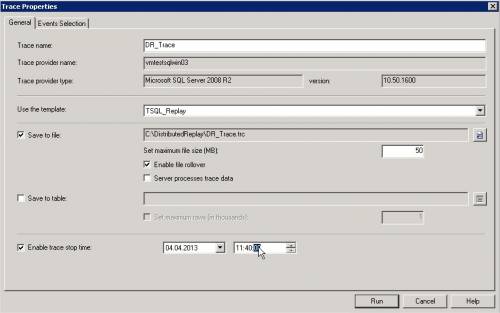 Add a name to your trace, save it to a file, change the property “Maximum file size” to avoid the split of your trace file. You should also enable a stop time for your trace which will save the workload during 20 minutes.

When the trace is done, you have to copy it on your Distributed Replay controller (vmtestsqlwin01) to perform the preprocess task.

To preprocess the trace we have first to open a command prompt windows and start the Distributed Replay controller services:

The syntax of the prepross command is:

To preprocess your trace, you should go back to your command prompt windows, execute ‘cd “C:Program Files (x86)Microsoft SQL Server110ToolsBinn” ‘ and run the preprocess command:

This process will create two files on c:distributedreplay which will be necessary to perform the replay. Those two files are ReplayEvents.irf and TraceStats.xml.

You can see the complete preprocess below:

Now that the trace is in preprocess, your Distributed Replay environment is ready to replay the trace on the target SQL Server vmtestsqlwin03.

First, you have to start the Distributed Replay client services on each client(vmtestsqlwin01 and vmtestsqlwin02) via the net start command on a command prompt window:

When, done you can go to the log file to see if both clients are connected to the controller (I explained how to do that in my first blog on this topic: SQL Server 2012: Installing and configuring Distributed Replay)

The syntax of the replay command is:

This command will execute a replay of the trace from the working directory c:distributedreplay where the preprocessed files are stored to the target SQL Server vmtestsqlwin03 via the two clients vmtestsqlwin01 and vmtestsqlwin02.

An output file will be created on each client in the Result Directory and the screen will be updated each fifteen secondes during the replay:

During the replay process, you can follow the status on the screen. When the replay is finished, you have the possibility to check the replay trace result on the ResultDir directory of each client.

Microsoft SQL Server Distributed Replay is in my opinion the best way to simulate a mission critical workload with the availability to run the trace up to sixteen clients with different modes like stress mode or synchronisation mode.

The drawback of this solution is that the implementation is more complex than with SQL Server profiler and also needs more resources (one controller, several clients and a target).