I am pretty sure you are wondering what Larry Ellison announced in his Oracle OpenWorld keynote, especially concerning Oracle 12c! In fact there were three major announcements, which I will cover in this posting. But first, let’s start with Fujitsu’s (Oracle Open World sponsor) announcement on a new SPARC technology. 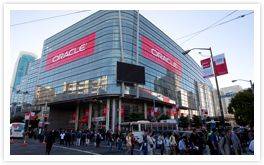 At the beginning of the session, Noriyuki Toyoki, Senior Vice President of Fujitsu Limited (which is this year the main sponsor of the OOW) introduced “Athena”, a new technology architecture for SPARC processors as the result of a long partnership between both companys. One of the core challenges for Oracle and Fujitsu (and for all hardware designers) is to move software processing inside the CPU. The “Athena” technology will soon be implemented on all Oracle SPARC hardware.

As promised, here are the three announcements of Larry Ellison’s keynote:

SaaS (Software as a Service, Oracle CRM, Siebel) and PaaS (Platform as a Service, Oracle Fusion Middleware) are well known Java applications and platforms. Starting with the Amazon cloud a few years ago, Infrastructure as a Service (IaaS) appeared. Now, Oracle, #1 in SaaS and Paas introduces IaaS with 2 types of clouds. On the one hand, the public cloud, hosted by Oracle itself and totally transparant (you pay what you consume) and on the other hand, the private cloud, which is exactly the same as the public cloud from a technology point of view, except that for this option, the hardware is located on the customer side. A mix of both types should be possible, e. g.: private cloud for a main data center, public cloud as a disaster recovery solution. Let’s wait and see.

Oracle 12c is announced for … 2013. A totally new database architecture which is oriented for consolidation. What does it mean? A “container” database may handle several isolated databases, which still have their own processes and memory allocated. This means a single point of configuration (one database backup for all the “hosted” databases), scalability, etc. Again let’s wait.

Last, but not least, Oracle has announced a new version of the Exadata machines with much more memory and plenty of flash drives to push your entire database into a flash cache. Besides, Oracle will release a very small version of Exadata with prices starting around 200K USD. For people having an Exadata version X2, a software upgrade will be released to update the machine. Oracle being the #1 SaaS and PaaS provider around the world, they try to become a world leading company in the IaaS (Infrastructure as Service) business, like Amazon.

Those who heard Larry’s keynote will understand the title “the world is not enough” ;-). As for everyone else, it was really our impression and also for one of our customer which is considering an Exadata solution.